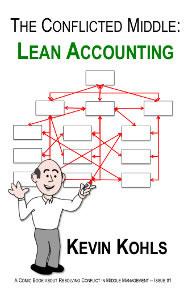 The Conflicted Middle: Lean Accounting is part of The Conflicted Middle comic series focused on a middle management Leader trying to improve a necessary condition for his company - making money. In this first issue, the story is about making financial decisions. We will follow his journey as he discovers that cost accounting no longer works in today's environment. He sees how Lean Accounting (largely Throughput Accounting) can magnify the success of his team's efforts. He realizes that he must help his organization make better operational decisions and create focused areas of improvement.
He will learn from two stories:
In the end, he and his team will decide that they must master a new tool in as part of their continuous improvement efforts: Lean Accounting.
The Conflicted Middle is a series of comics that examine the lack of progress associated with middle management. This group is often referred as the frozen middle, when in reality their resistance comes from the conflict that abounds in their level of management. These conflicts make them unable to:
In the end they become skilled at one thing - keeping their jobs.
The Conflicted Middle series will look at tools to minimize this conflict and allow middle management to become the most important level in the company. They will be the ones that push for new continuous improvement methods. They will become the force that changes the paradigms of employees. Ultimately, their efforts will lead to the culture shift required for the long-term success of the organization.

The ability for this type of analysis to generate improved profitability is key to the success of any company. Surprisingly, most people performing net profit calculations generate a wide range of wrong results, creating internal conflict and indecision. This presentation will focus on the basics of financial decision making that is summarized from Kevin's book: The Conflicted Middle—Lean Accounting.